Do The Gods Wear Capes? : Spirituality, Fantasy, and Superheroes
by Ben Saunders


A consideration of the modern Superhero comic as an expression of spiritual desire, showing what Superheroes can teach about our most essential human needs.

Brash, bold, and sometimes brutal, superheroes might seem to epitomize modern pop-culture at its most melodramatic and mindless. But according to Ben Saunders, the appeal of the superhero is fundamentally metaphysical - even spiritual - in nature. In chapter-length analyses of the early comic book adventures of Superman, Wonder Woman, Spider-Man, and Iron-Man, Saunders explores a number of complex philosophical and theological issues, including: the problem of evil; the will-to-power; the tension between intimacy and vulnerability; and the challenge of love, in the face of mortality. He concludes that comic book fantasies of the superhuman ironically reveal more than we might care to admit about our human limitations, even as they expose the falsehood of the characteristically modern opposition between religion and science. Clearly and passionately written, this insightful and at times exhilarating book should delight all readers who believe in the redemptive capacity of the imagination, regardless of whether they consider themselves comic book fans. 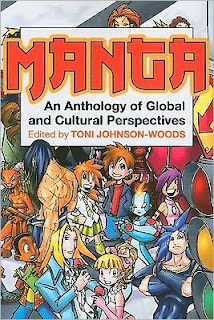 Manga: An Anthology of Global and Cultural Perspectives
edited by Toni Johnson-Woods

A collection of essays by an international cast of scholars, experts, and fans, providing a definitive, one-stop Manga  resource.

Once upon a time, one had to read Japanese in order to enjoy manga. Today manga has become a global phenomenon, attracting audiences in North America, Europe, Africa, and Australia. The style has become so popular, in fact, that in the US and UK publishers are appropriating the manga style in a variety of print material, resulting in the birth of harlequin mangas which combine popular romance fiction titles with manga aesthetics. Comic publishers such as Dark Horse and DC Comics are translating Japanese “classics”, like Akira, into English. And of course it wasn’t long before Shakespeare received the manga treatment. So what is manga?
Manga roughly translates as “whimsical pictures” and its long history can be traced all the way back to picture books of eighteenth century Japan. Today, it comes in two basic forms: anthology magazines (such as Shukan Shonen Jampu) that contain several serials and manga ‘books’ (tankobon) that collect long-running serials from the anthologies and reprint them in one volume. The anthologies contain several serials, generally appear weekly and are so thick, up to 800 pages, that they are colloquially known as phone books. Sold at newspaper stands and in convenience stores, they often attract crowds of people who gather to read their favorite magazine.

Containing sections addressing the manga industry on an international scale, the different genres, formats and artists, as well the fans themselves, Manga: An Anthology of Global and Cultural Perspectives is an important collection of essays by an international cast of scholars, experts, and fans, and provides a one-stop resource for all those who want to learn more about manga, as well as for anybody teaching a course on the subject.

Toni Johnson-Woods is President of the Pop Culture Association of Australia (PopCANNZ) and Senior Lecturer in the English, Media Studies and Art History School at the University of Queensland.

An exploration of how the legend of Thor has been adopted, adapted and transformed through history.

The myths of the Norse god Thor were preserved in the Icelandic Eddas, set down in the early Middle Ages. The bane of giants and trolls, Thor was worshipped as the last line of defence against all that threatened early Nordic society.

Thor’s significance persisted long after the Christian conversion and, in the mid-eighteenth century, Thor resumed a symbolic prominence among northern countries. Admired and adopted in Scandinavia and Germany, he became central to the rhetoric of national romanticism and to more belligerent assertions of nationalism.

Resurrected in the latter part of the twentieth century in Marvel Magazine, Thor was further transformed into an articulation both of an anxious male sexuality and of a parallel nervousness regarding American foreign policy.

Martin Arnold explores the extraordinary regard in which Thor has been held since medieval times and considers why and how his myth has been adopted, adapted and transformed.
Table of Contents

Introduction:Reverberations throughout History \ 1. The Giant Killer: Thor in Old Norse Mythology \ 2. Damnation and Resurrection: Thor from the Christian Conversion to the Enlightenment \ 3. The Romancing of Thor \ 4. Distant Thunder: Thor and the Nationalists \ 5. The God of War: Thor and the Fascists \ 6. Marvellous Thor \ Appendix \ Bibliography \ Index

Martin Arnold is Professor of Scandinavian Literature at Hull University. He is the author of The Vikings (Continuum, 2006).
Posted by Blog Editor, The Association for the Advancement of Scholarship and Teaching of the Medieval in Popular Culture at 11:07 PM No comments:

I was browsing the McFarland Publishing website last week and came upon the following: 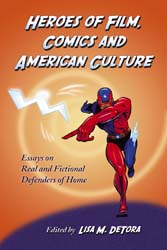 Description
These essays consider the way that heroes and the domestic spaces they defend have been represented in 20th and early 21st century popular forms, especially film, comic books and material culture. The authors work in various academic disciplines such as English, film studies, history and human geography, thus bringing a rich variety of theoretical vantage points to the reader in a single collection.

Topics covered include Tales of Suspense, Captain America, gender and popular culture during World War II, Iron Man and the military-industrial complex, Batman, Xena: Warrior Princess, The Ring, Ridley Scott, and many others.


About the Author
Lisa M. DeTora is an assistant professor and assistant director in the English department at Lafayette College in Easton, Pennsylvania. 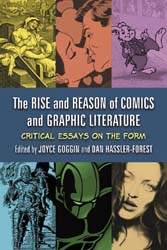 Description
These 15 essays investigate comic books and graphic novels, beginning with the early development of these media. The essays also place the work in a cultural context, addressing theory and terminology, adaptations of comic books, the superhero genre, and comic books and graphic novels that deal with history and nonfiction. By addressing the topic from a wide range of perspectives, the book offers readers a nuanced and comprehensive picture of current scholarship in the subject area.

Part Two. What We Talk About When We Talk About Comics: Theory and Terminology
4 Balloonics: The Visuals of Balloons in Comics
Charles Forceville, Tony Veale, and Kurt Feyaerts 56
5. Remediation and the Sense of Time in Graphic Narratives
Kai Mikkonen 74
6. Brick by Brick: Chris Ware’s Architecture of the Page
Angela Szczepaniak 87


About the Author
Joyce Goggin is an associate professor of literature, film and new media at the University of Amsterdam and Head of Studies at Amsterdam University College. Her primary research is on gambling and its representation in various media, though she has published on topics including film adaptation and Jane Austen, the tarot in literature, film serialization, The Gilmore Girls and addiction, and disaster capitalism.
Dan Hassler-Forest teaches media studies and English literature at the University of Amsterdam, where he is currently finishing his dissertation on superheroes in post-9/11 popular culture.
Posted by Blog Editor, The Association for the Advancement of Scholarship and Teaching of the Medieval in Popular Culture at 7:17 PM No comments: