Posted by The Virtual Society for the Study of Popular Culture and the Middle Ages at 11:51 PM No comments:

Rizzoli Universe Promotional Books has recently released a new printing of last summer's Constructing Green Lantern: From Page to Screen. The book (featured last year on the blog) is an in depth look at the making of the feature film and is being offered at a substantially reduced cost. Details below: 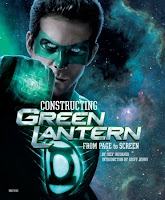 Constructing Green Lantern is the ultimate companion book to the movie, showcasing production ephemera including: storyboard art, character sketches, concept art, and still photos from the movie's sets. Constructing Green Lantern will also contain observations and insights of the film by producers, art director, and various other film crew.
Posted by The Virtual Society for the Study of Popular Culture and the Middle Ages at 11:45 PM No comments:

Conceived by J. Michael Straczynski, Superman: Grounded (now collected as a two-volume series) was an arc that ran through the Superman series from 2010-2011. It appears to have been conceived as a celebration of the 700th issue of the title, but instead serves as a swan song for the Silver/Modern Age incarnation of the character as he was rebooted soon after as part of the New 52 (more on this eventually, if I can stomach it). 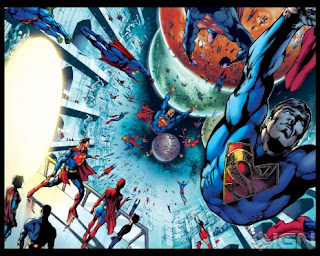 As a story Superman: Grounded is engaging and, hearkening back to the "relevant" comics of the 1970s, offers much insight (along with the recent series Superior) into the need for a Superman figure in the twenty-first century DC Universe. The series also provides details into the future of the Superman legend including the existence (hinted at in earlier stories) of a huge corps of Supermen, the self-styled "Superman Squad", existing in the distant future and (similar to the recent formation of Batman Incorporated) the Supermen of America, a team of modern-day heroes including Iron Munroe, Live Wire, Steel, Super Chief, Superboy, and Supergirl. Both teams are proud legacies for the almost 75-year-old hero.
Posted by The Virtual Society for the Study of Popular Culture and the Middle Ages at 11:16 PM No comments: 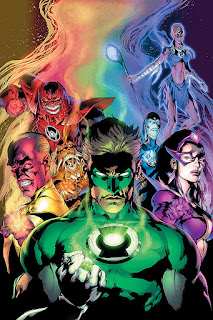 The brainchild of Geoff Johns, the Blackest Night crossover series is a tie-in to the Green Lantern series (also by Johns) that ran throughout the various DC Universe books during 2009 and 2010. The premise is that dead heroes and villains are returning to a semblance of life (they're not quite zombies nor are their bodies reanimated by the actual consciousness of the deceased) as members of a Black Lantern Corps in an attempt to destroy the Entity, the creator of all life in the multiverse.

The idea of the series is interesting (though a full-scale zombie apocalypse might have been a more powerful story), and there were a number of engaging tie-ins (some collected as Blackest Night: The Black Lantern Corps). In terms of impact, Blackest Night is important for killing off a number of major characters (including Tempest) and, also, for reviving a select group of dead heroes (Aquaman, Deadman, Firestorm [Ronnie Raymond], Hawk, Hawkgirl, Hawkman, Jade, the Martian Manhunter,and Osiris) and villains (Captain Boomerang, Maxwell Lord, and Professor Zoom, the Reverse Flash) to feature in Brightest Day, an ultimately rather lackluster follow-up series (more on this eventually). Moreover, Blackest Night is of supreme importance for the Green Lantern series in its introduction and incorporation of additional Lantern Corps powered by other aspects of the emotional spectrum, and these revelations have continuing impact on the Green Lantern franchise in the comics, as well as on film and television in the ongoing Green Lantern: The Animated Series.

Posted by The Virtual Society for the Study of Popular Culture and the Middle Ages at 10:38 PM No comments:

Posted by The Virtual Society for the Study of Popular Culture and the Middle Ages at 10:03 PM No comments: 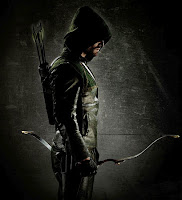 TV Guide has posted the attached photo of the new Green Arrow for the Arrow live-action pilot now under consideration with the CW network. Further details at: http://www.tvguide.com/News/Stephen-Amell-Green-Arrow-Photo-1045039.aspx.
Posted by The Virtual Society for the Study of Popular Culture and the Middle Ages at 8:56 PM No comments:

Syfy lists the following program/special to air on May 25th. Further details as/when/if they become available.

25 Wildest Homebrewed Superheroes
Posted by The Virtual Society for the Study of Popular Culture and the Middle Ages at 7:33 PM No comments: