Check out this clip from the new Looney Tunes series: http://www.youtube.com/watch?v=EGhbL20Ap8Q.
Posted by The Virtual Society for the Study of Popular Culture and the Middle Ages at 12:07 AM No comments: 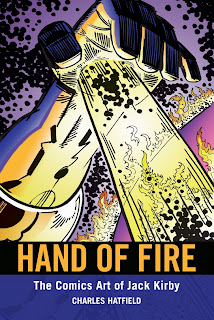 Hand of Fire: The Comics Art of Jack Kirby
By Charles Hatfield

Jack Kirby (1917-1994) is one of the most influential and popular artists in comics history. With Stan Lee, he created the Fantastic Four and defined the drawing and narrative style of Marvel Comics from the 1960s to the present day. Kirby is credited with creating or cocreating a number of Marvel's mainstay properties, among them the X-Men, the Hulk, Thor, and the Silver Surfer. His earlier work with Joe Simon led to the creation of Captain America, the popular kid gang and romance comic genres, and one of the most successful comics studios of the 1940s and 1950s. Kirby's distinctive narrative drawing, use of bold abstraction, and creation of angst-ridden and morally flawed heroes mark him as one of the most influential mainstream creators in comics.

In this book, Charles Hatfield examines the artistic legacy of one of America's true comic book giants. He analyzes the development of Kirby's cartooning technique, his use of dynamic composition, the recurring themes and moral ambiguities in his work, his eventual split from Lee, and his later work as a solo artist. Against the backdrop of Kirby's earlier work in various genres, Hand of Fire examines the peak of Kirby's career, when he introduced a new sense of scope and sublimity to comic book fantasy.

Charles Hatfield, Northridge, California, is associate professor of English at California State University, Northridge. He is the author of Alternative Comics: An Emerging Literature. Follow his blog at http://handoffire.wordpress.com/.

304 pages (approx.), 7 x 10 inches, 32 line illustrations, appendix, bibliography, index
Posted by The Virtual Society for the Study of Popular Culture and the Middle Ages at 9:22 PM No comments: