Thoughts on Man of Steel

I'll start off by saying that I like Superman, but DC's constant re-imaginings of the character have become tiresome. In particular I take offense with the recent film Man of Steel (see trailer below) directed by Zack Snyder and written by David S. Goyer and Christopher Nolan, who also served as one the film's producers.


The production serves as (another) reboot of the franchise and is both an origin story (told, confusedly at times, in a non linear narrative) and a remake of Superman and Superman II. However, unlike its predecessors, the new film--in my opinion--has no heart (a frequent comment according to the film's entry on Wikipedia). All of the characters and their back stories are preexisting, and we don't really connect to any of them, not even our hero. Instead, we get a film that relies too much on technological wonder to impress (and I really wish there were some clips available online). The opening scenes on Krypton recall the sf worlds of George Lucas and James Cameron with their focus on weird alien creatures and fluid technology. Fight scenes on Earth are unreal (even for Superman) and resemble too much the latest video games, and it is a wonder that anyone in Metropolis survives in the end with so much of the city demolished. In addition, the message of the film seems to be subverted in the way Superman deals with his nemesis. We learn that the S-shield is a Kryptonian glyph for hope and that Jor-El intended his son to serve as a bridge between the two cultures, but [SPOILER ALERT], in the end, everything uniquely Kryptonian is destroyed and its future wiped out (again). (Though there remains [SPOILER ALERT] the odd fact that Jor-El has implanted the DNA of his entire race into his son's genetic code.) Finally and, perhaps, most troubling, the end(ing) of Zod seems to go against everything the hero has stood for these past 75 years, though I'll say no further in the interests of not spoiling things further. With all the big name people involved how could everything have turned out so bad? (There are also inconsistencies with the science of the film; if it took Clark Kent almost a decade to come into his powers how do [SPOILER ALERT] Zod and his force gain their powers so quickly [though this is also a problem with Superman II]. Likewise, [SPOILER ALERT] how could Superman's powers fade so quickly aboard Zod's vessel? Shouldn't he have 30+ years of solar radiation in reserve?) With all that said, the ending shows promise for the future of the franchise. [SPOILER ALERT] We open any new film with Lois already knowing all of Superman's secrets paving the way for a more equal partnership like that once portrayed in the pre-New-52 DCU. If only the villain could be someone more down to Earth, then, I think we might see a good film.

My reaction to the casting is less of an issue; however, only a few of the actors stood out in my mind. Amy Adams is an intriguing choice for Lois Lane, though the overweight Pete Ross and underweight Steve Lombard were disconcerting. Michael Shannon seemed to lack the gravitas of Terence Stamp's earlier Zod (though his reason for rebelling against the Science Council is truly a masterstroke of storytelling, if it is original to the film) and Antje Traue certainly lacked the sinister qualities of Ursa, Zod's associate in Superman II; likewise, Russell Crowe is no Marlon Brando, but [SPOILER ALERT] the character's haunting of the film made for an interesting touch. Moving to other father figures, Kevin Costener seemed a lackluster Jonathan Kent, but Laurence Fishbourne's portrayal of Perry White was interesting (though the earring seems a fashion faux pas). Also, I really liked Cooper Timberline, the actor playing the younger Clark Kent (see image), and felt his character's story the most appealing here. 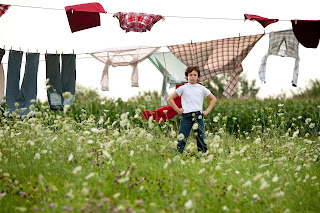 Why not focus on his adventures as he comes to discover his place in the world? Why not show our youth a story of overcoming trials and adversity while struggling to find one's place in the world, instead of a slug fest? Of course, Smallville has already attempted some of this but not from the perspective of a prepubescent hero. This should not be an impediment to the producers, after all they're rehashing old material anyway.

Posted by Blog Editor, The Association for the Advancement of Scholarship and Teaching of the Medieval in Popular Culture at 11:41 PM